The energetic buzz of the Toa Payoh Central was extremely effecting and perfect for the first neighbourhood to kick-start our photo-collection drive at Singapore Snaps. Toa Payoh Central has every conveniences to suit the quintessential middle-class Singaporean lifestyle – a train station linked to a bus interchange, a cozy public library, and a wide selection of eateries ranging from coffee shops, food kiosks to fast food restaurants and all the ubiquitous food chains. There are also supermarkets, mega-stationery-shop, banks and rows of shops selling clothes, gadgets, services and what-nots.

Mdm Sisilia Tan and company posing for a picture by the sculpture found in Toa Payoh Town Park with the estate in the backdrop. Photo: Sisilia Tan

Also located here is the headquarters of our nation’s Housing Development Board (HDB).  Situating the headquarters here is extremely apt for being the first town to be built ground-up by the board in 1968. With a neighbourhood population of close to 116,000 people, it is not a surprise that the town centre will always be crowded with people, especially during the evenings and weekends.

Through chatting with the local residents, we discovered the urban legends and quaint histories of this neighbourhood.

1. Urban legend goes that there was an immutable “Tree God” which fell in a storm in September last year.

Every morning, the SG Snaps team strolled past the site where the “Tree God” used to be – on the way from the train station to the community library. We were told about the lightning strike that brought down the tree said to be over 100 years old. It is with this curiosity that we searched for the site to pay tributes.

Upon quizzing a few of the shop owners in the vicinity, we were directed to a tightly barricaded site that seemed dilapidated and uncared for. The emptiness of the space was a huge departure from our imagination of the tree with majestic bark and extensive branches that shaded the temple that was beneath it.

A photo from the 1970s of the sacred tree and its temple at Toa Payoh Central. Photo: National Archives of Singapore, Source: Singapore Press Holdings

The site did exude a mystical charm which was even more resonant when we learned of the strange occurrences when the new town was constructed in 1965: The bulldozers that were tasked to flatten the area malfunctioned when they approached the tree. Workers who tried to fell the tree had also died mysteriously. The town planners then had to alter the layout of the shop houses to accommodate the tree in the centre. Isn’t it interesting how our urban development can be shaped by mysticism and superstition?

2. Toa Payoh Public Library was one of the earliest full-time library to open after Queenstown.

The location, prior to the opening of the library, was the Games Village which housed athletes for the 7th South East Asian Peninsula Games. It was the first regional sporting event ever held in the country in 1973.

A portrait at the fountain in front of Toa Payoh Community Library. Photo: Chan Lee Shan

Before the amphitheatre in the front of the library was built, there was a huge water fountain where many of the residents gathered for photographs. 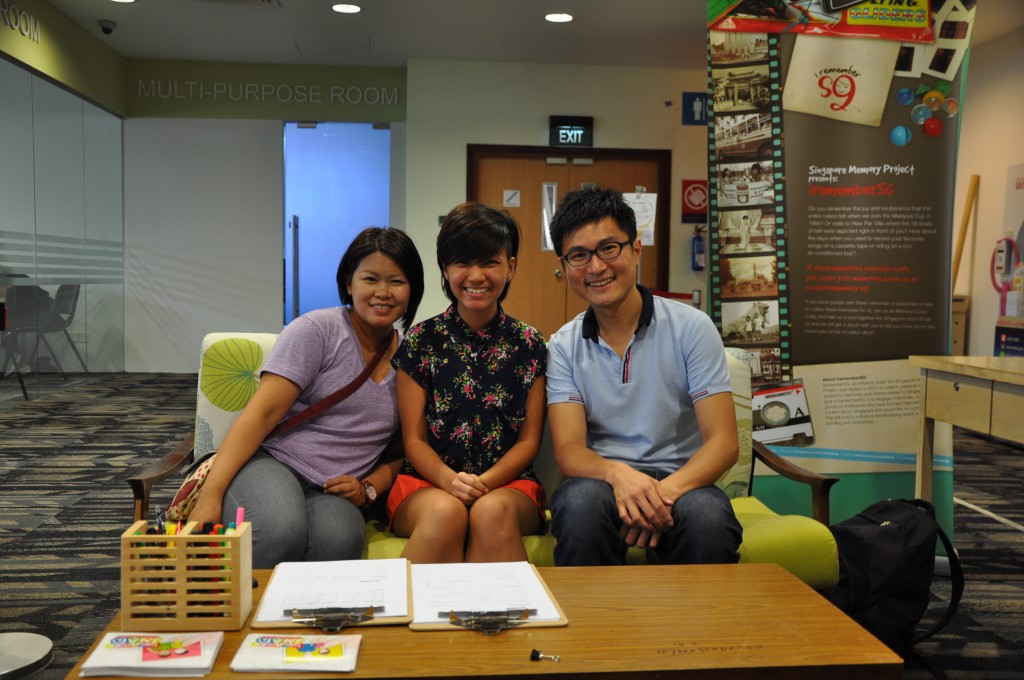 Toa Payoh Community Library has got to be one of our favourite libraries visited. The library was streaming continuously with visitors over the weekend. Besides being a conducive air-conditioned haven for our tired volunteers to catch their breaths, the library staff there were simply endearing. Uncle Sunny is one of them, along with the counter staff who would climb up and down the stairs assisting our requests. Huiyi and Shao, from the Arts and Culture team of the National Library Board, were the ones who made our 3-weeks residence at the library possible. We missed the friendly cleaning aunties whom we grew close to and felt so sorry when we had to leave for another library.

Ask any long-staying resident for a historical anecdote of Toa Payoh and they will definitely mention the visit of Queen Elizabeth II. The lucky then-boy-now-man visited by the Queen in 1972 is Mr Jerome Lim, writer of the blog ‘The Long Winding Road’ which reminiscent intimately the personal histories of growing-up in Singapore.

Her Majesty Queen Elizabeth II on the rooftop of Toa Payoh’s VIP Flat at Blk 53 Lorong 5, during her visit in 1972. Photo: www.toapayoh.com

The Queen had visited Mr Lim’s 3-room flat – a VIP Flat with a rooftop viewing gallery, which sounds like the [email protected] of the 1970s. She returned to the estate 34 years later in 2006 during her Diamond Jubilee tour of the world. There must be a certain nostalgia and pride that our country holds for our history of being colonised.

4. How can we not possibly mention? The Dragon Playground, of course. 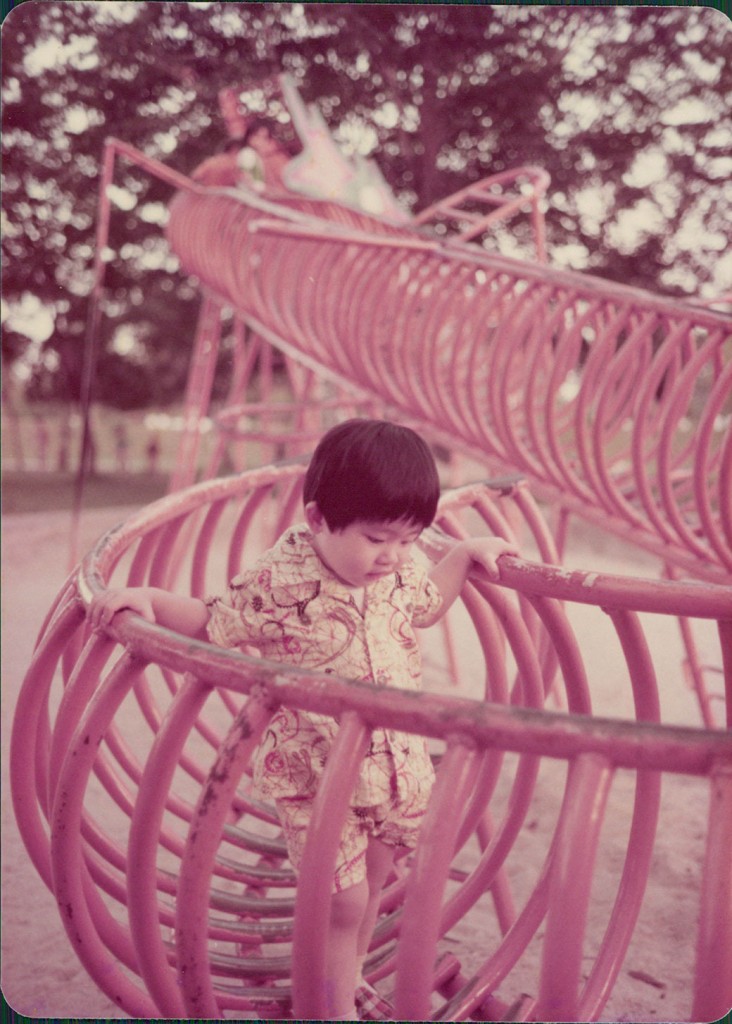 Walking along the long ‘body’ of the Dragon. Photo: Seow Shin Horng

I suppose, most heritage buffs in Singapore would know of the Dragon Playground along Lorong 6. The playground has become so iconic that it has inspired more replicas and reflections than the Merlion in the last 2 years.

The Dragon Playground was part of a series of animal-inspired playground designed by the HDB in the 1970s. Other motifs include the Pelican, Dove and Elephant etc. In the collection of photographs received from the public, there were many cute kids portraits taken at these playgrounds. It is no doubt that these playgrounds have a prominent place in the childhood memories of Singaporeans who grew up during that era. Though there is another dragon playground in Ang Mo Kio, it is the one in Toa Payoh that retains the sand pit. A sand-filled playground was a common structure in most neighbourhoods, before boring rubber matting replaced the sand. What’s the fun if you can’t throw sand into the eyes of your enemy/crush ?

5. Toa Payoh used to be a farmland.

Part of the old Toa Payoh came alive when we spent an afternoon with Mdm Lim Mui Tiang, a resident of Toa Payoh. Mdm Lim recounted where the farms were, and how the HDB flat she’s living in was previously a hill flattened for the construction of the town. At the age of six, she helped at her family farm with the harvesting of vegetables and feeding of the poultry. By seven, she was bringing water from the well. Though we probably have heard similar stories from the earlier generations many times, it is hard to imagine the same kind of hardship for any children growing up in modern Singapore.

Toa Payoh has come a long way from its earliest histories of being made up of marshland and plantations. The name “Toa Payoh” means “big swamp”  in the Hokkien dialect. Walking down the concrete paths, watching people sip coffee from Starbucks, families pushing their children around in strollers and pedestrians burying their heads in their devices, it must be really astounding to witness such tremendous change within a single lifetime.