Four Reasons Why Redhill is Legendary

For all of those who went to primary school in Singapore during the 1990s, the legend of Redhill is a story that we are familiar with. The folklore tells of how the hill turned red, when the blood of the brilliant young boy named “Hang Nadim” was spilled after a jealous Sultan ordered for him to be killed. Those were the days when the coasts of Singapore were infested with ferocious swordfishes that would kill anyone who came close to the sea. The young boy “Hang Nadim” provided the solution of using the banana stems as traps to be erected in front of the shoreline to capture the swordfishes. Upon the success of his idea, his earned popularity with the people enraged the sultan, leading to the boy’s cruel death.

An image of the attap huts at Redhill, where a fire broke out in 1963. Photo: National Archives of Singapore

Old legend aside, Redhill today continues to prove itself as “legendary” in our Singapore Snaps collection drive. Here are four reasons why:

A child at a playground with the “chek lau” flats in the background. Photo: Lim Poh Kwan

Built in 1955, these low-rise flats give Redhill a nostalgic serenity that you can only find in the old estates. The flats are well-spaced and you can see beautiful sunlight streaming in the daytime.

Whilst visiting the residents there, we found out that the flats along Redhill Close are due for the Selective Enbloc Redevelopment Scheme by 2017. In the face of demolition, a few of the apartments there are now empty. Even the Taoist temple Chin Lin Keng (Zhen Ren Gong in Mandarin) in the vicinity is due for redevelopment.

A view from inside an apartment on the top floor of a “chek lau” flat in Redhill. In this photo, you can see the old Housing Development Board Headquarters Building, which used to be located at Bukit Merah Central. Photo: Cher Su Hoon

Recently, there had been a call for conservation following the flats of the Singapore Improvement Trust in Tiong Bahru. But with the soaring value of the government housing in neighborhoods like Redhill that are closest to the city areas, you cannot fault anybody for being skeptical. In a country that puts pragmatism in the forefront of any decision-making, nostalgic poetics of the past is a luxury that we cannot afford.

Teochew satay beehoon, hainanese curry rice, fried carrot cake and chicken rice are amongst the famed must-try-dishes at Redhill Hawker Centre. Even the fried chicken wings had our Prime Minister Lee Hsien Loong standing in line for half an hour. 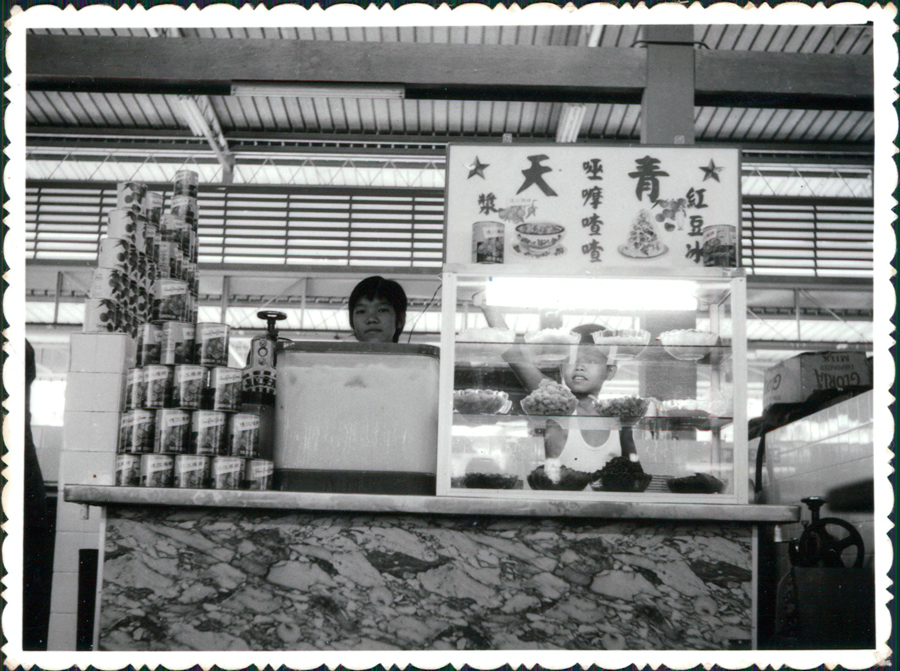 If you remember the social media furor on that episode, PM Lee had posted an image of a lucky cat from one of the dessert stalls. As it turned out two weeks later, we had stumbled upon and met Mdm Lim who is the owner of the dessert stall. She contributed some of her old photographs that same stall since it first opened in the 1970s. We will share more on her story in a later entry. Keep a lookout for it!

There are barely any written records, but Redhill is infamous for being the den for the triads.

We had met an elderly Eurasian man, Michael, in his 90s who recalled serving as a policeman in the late 1940s. “I had to catch all the gangsters over there,” said Michael, pointing in the direction of Bukit Merah Central from his flat along Redhill Close. “They were all very fierce, but we had to catch all of them,” he said.

Some residents recalled finding drug users shooting up in the stairwells, while others talked about the fights that happened at the void decks. Imagine the level of danger there was with gangsters in those days. But if you were to visit Redhill on Friday evenings, you would find remnants of the neighbourhood’s gangster past. The neighbourhood police still makes its rounds regularly, whilst groups of merry-makers toast boisterous and drunken cheers over bottles of tiger beer and “tzi char” (local hawker stalls selling restaurant-style Chinese dishes) delicacies.

Samsui women having their meal and resting from their back-breaking jobs at the construction site in the 1950s. Photo: National Archives of Singapore

Redhill is home to a growing population of elderly. Some of the elderly living here, used to be the Samsui women whose work in Singapore’s early building industry remains one of the most iconic in the country’s history.

In the early 70s, the government had built several flats catered for the elderly and the poor. These single-room flats are located at Bukit Merah View, along Henderson Road. Located at the void decks are several social service organisations which cater to the community.

We chatted with the many elderly residents who live alone, while in the neighbourhood. Some of them would frequent the centers at the void deck for craft sessions and Wii (a wireless game console) games, whilst others would just keep to themselves. At times, we met a household of entire families living in the cramped quarters. Witnessing life in these single room rental flats prods us to think about how an SG50 project celebrates the progress that Singapore has achieved, and recognise the people that may have been left behind.