Studio Portrait Trends from the 1950s-80s

With so many wonderful studio portraits within our photo-collection, this genre of image-making in our cultural history definitely deserves our observation and survey.

To start, I was skype-chatting with a long-time friend, Daphne Ang, who was recently at the NUS Museum doing a research fellowship on portrait studios in Singapore from the late 19th to early 20th century. I had sadly missed the city tour that she had conducted here, but I was fortunate to chat with her remotely in London where she is pursuing her PhD in an extension of her research on the early commissioned portraits. Daphne also has a project called “Portraits of the Straits” that is very close to what SG Snaps aspires to unveil, but with a more scholarly angle. Together, Daphne and I had taken a look at some of the studio photographs from the SG Snaps collection and it turned out that majority of the images were dated beyond the 1940s into the 1990s, outside the scope of her research. So she psyched me up in investigate the photographs from post-independence era, in hope that I could conceivably create a chronological continuity for the studio portraits throughout the history of Singapore.

1. Studios moved from the city into the neighborhoods through the early to the late 20th century.

In Daphne’s research of the early photography studios, she wrote about how the pioneer studios ran by European photographers were first located at the heart of commerce – along High Street, Stamford Road and North Bridge Road. However in the 1890s, Chinese-operated photography studios began to flourish in the Chinese quarters of the city, like Koon Sun Photo Studio along South Bridge Road. We found out, from the addresses printed on studio portraits collected by SG Snaps, that after the 1950s, locations of new photo studios had spread further out into the neighborhoods with the establishments of new towns in Singapore. It is common for the studios to be at the ground floor of public housing buildings, like the one in the image below. Understanding how the earliest studio portraits were commissioned by the more affluent community and thinking of photographs as tokens of identity, could this movement of photo studios into the neighborhoods signify the desire of a growing middle class to create representations of themselves?

2. The props and backgrounds evolved to reflect the times.

Early studio portraits were very elaborate in dressing the set and the sitters. In the Chinese tradition of portrait-making, photographs were composed quite similarly to the paintings.  The level of intent placed in picturing the sitter and his/her status was so careful, to the extent that adornments signifying status will be drawn on its absence.

Early portrait of a Chinese matriarch, possibly not taken in Singapore, with jade bangles and rings drawn directly onto the print. Photo: Lee Fook Weng

A studio portrait of a Chinese lady with a gold jewellery and jade pendant drawn on to the photographic print. Photo: Evelyn Tan

Though commissioned studio portraits had evolved to be less decorative and simpler over the years, the props used reflected its current trend.

Two ladies having fun during a shooting session with an electric guitar and microphone. Photo: Lim Poh Kwuan

A lady wearing a kebaya posing with a radio and telephone. Photo: Seow Shin Horng

Props and backgrounds aside, the fashion of the times makes too for a standout statement.

3. The advent of the air-conditioner.

In hot and humid Singapore, it became an important consideration for the customers whether a photo studio has air-conditioning, or not. Who would want to be sweating at the once-in-a-lifetime photo session? Thus, many photo-studios emphasised and promoted their air-conditioned studios at the corner of their prints to win over customers and to keep up with competition.

Wedding couple in a studio with an air-condition system called the “Cool-lit”. Photo: Lee Fook Weng

With the growing popularity of western gowns and suits for wedding portraits, an air-conditioned studio were more ideal and popular for photographs compared to the sweltering heat of the outdoors.

A portrait taken at the Golden Studio that had air-condition facilities. Photo: Lee Ah Dah

4. Transitioning from black-and-white to coloured prints.

During the days of black-and-white photography, colours envisioned by the photographers were colored by hand onto either the glass plate of the negative or onto the print itself.

In the 1970s, colour photography became available and made a swift entrance into the output of photo-studios in Singapore. The demand for colour images was high. Towards the 1980s, the black-and-white photographs were only reserved for passport photos. According to Mr. Ang Mong Kee, a photo-studio owner along Henderson Road in the 1980s, it was common for photo studios to bring color negatives to an external lab as the color-photo developing machines were too expensive for small independent studios. The black-and-white photographs were, however, processed on-site at the studio. 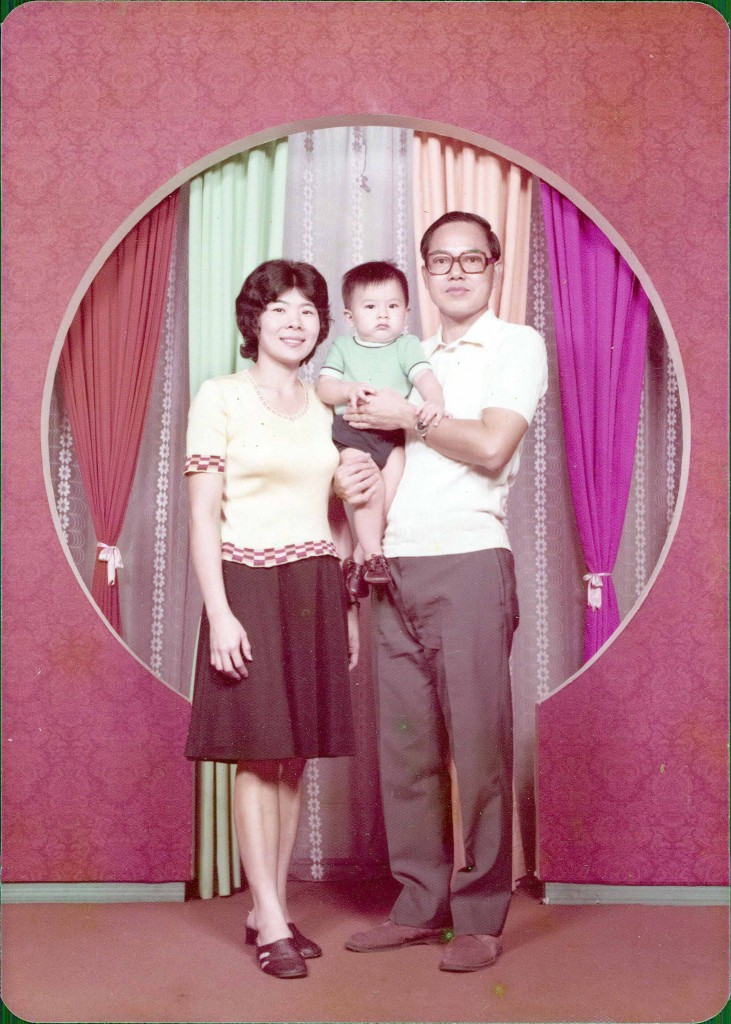 Understanding the procedures of analog photography has definitely allowed me to appreciate better the level of workmanship gone into mastering the craft of studio portraits. It is extremely challenging to make a good studio shot, and I have developed a new level of respect for our pioneer photographers. In regards to the photographs collected to be emblems of aspirations of a community in that era, they have given us much insight into how identity continues to be shaped in the way we present our own image as tokens of history.