A Walk to Remember – An Intimate Conversation with Wei Keong

On eve of mother’s day, many of us would be thinking of the best idea to shower our mothers with love and appreciation. Perhaps a grand dinner with the entire family at mum’s favourite restaurant? How about getting her that pair of shoes that she was eyeing through the shop window for the longest time? Maybe some flowers and a jar of home-made goodies? Or even a simple kiss on her cheek, and a hug to remind her that she means the world to you? For Wei Keong, a visit to the columbarium where his mother’s cinerary urn is housed, was how he had honour his mother this year.

Close to 6 years ago, Wei Keong’s mother had passed away of ovarian cancer and related complications. I remember the time when we were still in university, Wei Keong once told me over recess that his mother was battling the disease, and she was in the final stages of her life. Though I definitely knew that it was a very difficult time for him and his family, Wei Keong never looked the least battered. He is a fighter in my eyes, with a perpetual sunshine shining from a darkened heart. In front of his mother’s plaque we sat, looking through two old photo albums which he had brought along with him. In it were images of his mum in her youth, taken during outings with her friends, as well as couple portraits of her with Wei Keong’s father.

“I really like this photo, they look very happy,” said Wei Keong while looking at the photo of his parents on a holiday. Photo: Tan Wei Keong

He talked about how the albums are emblems of life – his mother’s devoted life for him and his two siblings, who would take them out from the drawers occasionally. Looking at the photographs would make them feel nostalgic. 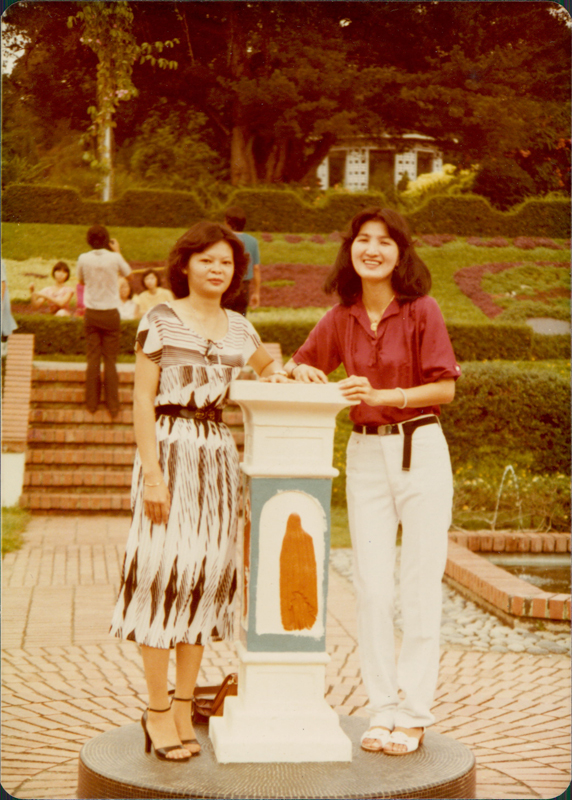 Wei Keong inherited his mother’s smile. Here, she is posing with a friend for a photo by the sundial at the Botanical Gardens. Photo: Tan Wei Keong

“Just seeing the pictures, she looked like she was ready to take on the world and accomplish a lot of things in the future,” he said.

By the fountain at the Botanical Gardens – a rare stand-alone portrait of Wei Keong’s mother.

On the topic of expressing love, Wei Keong shared with me how he learned that it is important not to restrain those feelings, unlike the distant propriety he feels in a traditional Chinese family. “What I learned, when taking care of my mother when she was sick, and after she had passed away, was to say things which are on your mind right there and then, be it ‘Thank you’ or ‘I love you’. I don’t believe in forever. Tomorrow might never come.”

Of all mother’s day presents, Wei Keong remembers a purposeful trip to the market after school when he was seven. He pointed to a single red rose at a makeshift flower stall and bought it home. “My mother was doing the family’s laundry in the toilet, scrubbing shirts against a washing board. I stood outside the toilet, rose in hand, and stretched it out to her,” Wei Keong recalled. His mother is pleasantly surprised. She came out from the toilet, and wiped off the suds from her shrivelled hands on her baggy shirt, before taking the red rose. “I don’t remember her saying anything. But the rose stayed for a long time on the refrigerator, and she told a lot of people about the rose.”

As the sun was setting, Wei Keong and I took our leave from the columbarium. We walked pensively for a long time, from the columbarium down the expressway under the roar of the traffic. Continuing our conversation on the photographs, he confessed that he seemed to only learn more about his mother after her death. It was from these photographs that painted a complete image of her from a time before his birth. Now, these images continue to resonate in his life beyond hers.

Can photographs be a meeting point for two people who will never see each other again to continue to love each other? Remembering the gaze in Wei Keong’s eyes when he was looking at the photographs of his mother, I certainly think so.